Flyball is a team sport for dogs that was invented in California in the late 70's. Legend has it that Herbert Wagner first showed it on the Johnny Carson Show to millions of Americans. Soon afterwards dog trainers and dog clubs were making and using Flyball Boxes. In the early 80's the sport became so popular that the North American Flyball Association (NAFA) was formed and they are the worldwide authority for Flyball. 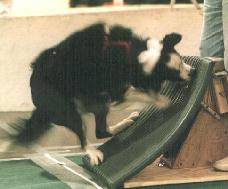 Flyball is a relay race with 4 dogs on a team. The course consists of a starting line, 4 hurdles spaced 10 feet apart and a box. The first hurdle is 6 feet from the start line and the box is 15 feet from the last hurdle for a 51 foot overall length. The dogs jump the hurdles and steps on a spring loaded box that shoots out a tennis ball. The dog catches the tennis ball and then runs back over the 4 hurdles. When the dog crosses the starting line the next dog goes. The first team to have all 4 dogs run without errors wins the heat. Tournaments are usually organized in either a double elimination or round robin foramt. Double elimination is usually best of 3 or best of 5. Round robin is usually best 3 out of 5 and the first team to win 3 heats receives 1 point towards their standing in the tournament.

The fastest time is 15.43 seconds by SpringLoaded from Michigan, USA..

The dogs earn points towards flyball titles based on the teams time:

The titles the dogs can earn are:

In North America, Flyball is governed by the North American Flyball Association(NAFA). Rules can be downloaded (PDF) from the NAFA Publications page.

In the United Kingdom, Flyball is governed by the British Flyball Association

In Belguim, flyball is governed by the Belgian Flyball Federation.

In Australia, contact the Australian Flyball Association at http://www.flyball.org.au/flyball/

If there are Flyball organizations in other countries, drop me a note (kjh@flyballdogs.com) and I will add them to this list.

How can I get more info?

The Flyball Home Page is located at http://www.flyballdogs.com

The vast majority of Flyball communications is on the Flyball email list. You join the list by sending an email message to flyball-request@flyballdogs.com with just subscribe in the Subject of the message. After you have joined the list you can post messages to

The British Flyball Association publishes it's own newsletter, The Flyball Record. Copies are available online at http://www.flyball.org.uk/publications/main_page.htm

There have been a few books published on Flyball.

And they are available from

Where can I get equipment?